The joke says that in Spain these days all conversations lead to Rosalía…….

Now I’m back to the playground after work, (should) have time to write, and will probably need time to digest everything I’ve seen and heard on those concerts. It was intense and fantastic. 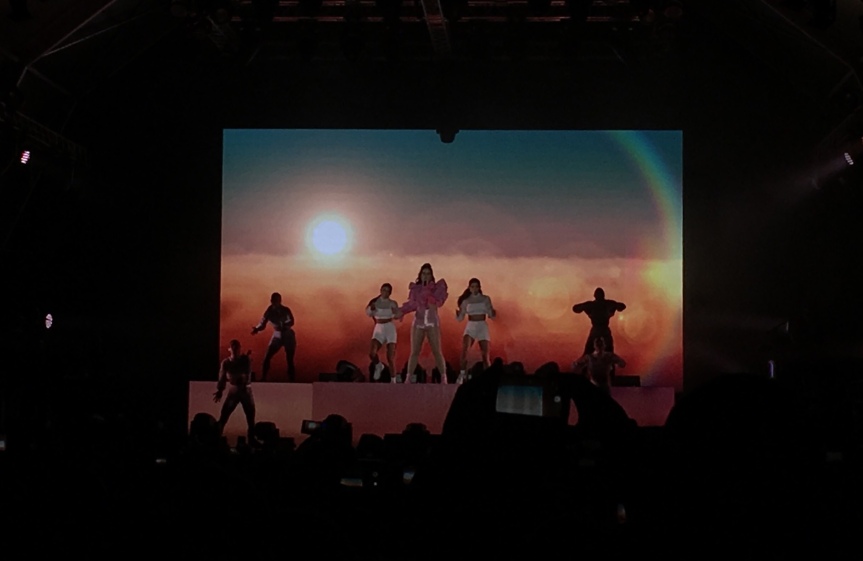 As I said, the marathon of concerts finished with Rosalía, on a Monday evening in Somerset House. The home of the Courtauld Gallery, many exhibitions and concerts, talks and workshops, and film screenings in the summer.

There has been and probably still is a lot of controversy about Rosalía in the flamenco world. Traditional flamencos protesting about her music, youngsters loving it, some call it flamenco, others vehemently refuse calling it anything that has to do with flamenco.

I am still on the opinion that her first album, Los Angeles (Angels) was a beautiful interpretation of old flamenco songs. Her second album El Mal Querer (Bad love) used flamenco elements, rhythm, beats, movements, claps, and created something new, something fresh in the world of fusion. She used flamenco, but clearly not made a flamenco album. Has anyone ever had any doubts about it?! Shouldn’t have. The new songs like Con Altura (“with swagger”, but also hint at “being high”) or Dios nos libre del dinero (God save us from money) are even further away from flamenco. The new direction is definitely not mine. Not only musically – this mix of trap/reggaeton/flamenco is not my cup of tea – but also the new dance style, the way she dresses, the nails she wears are far from what I like. But all in all, I loved her album Los Angeles, especially her song Catalina, and enjoy listening to El Mal Querer, so we decided to go to her concert.

As it was a night out without kids, first we went for dinner and decided not to go to the concert before Rosalía. I love the concerts in the UK, because they are so well organised there is no need to queue up for hours to get into a concert. Arrived at Somerset House half an hour before start time (9pm), and with the excellent queuing system in place at the bar, we even got the G&Ts in record time (didn’t take me longer than 5 minutes!). We stayed in the back, but in the middle, so had a great view on the stage. The place was packed, but not uncomfortably, there was enough space to dance. And what’s even better, it started on time. The concert was announced at 9pm, and Rosalía was on stage at 9.02pm Greenwich Mean Time.

Managing expectations well: not thinking you are going to a flamenco concert, the concert could be greatly be enjoyed! She sang most of the songs from El Mal Querer, like Malamente, Pienso en tu mira, Di mi nombre etc.; a few of the new songs, like Con altura and Dios nos libre del dinero; and of course, Catalina.

The order of songs was well planned, with Rosalía speaking to the audience in between songs about the songs themselves and also a bit about herself, having walked the streets of London, when she still had plenty of time, and was dreaming about becoming a singer, singing here one day. Mission completed. Her English was really good, but I guess that’s no surprise from an international superstar she has become, having performed in Coachella, having sung with J Balvin…

The music you either like or not, but we also have to talk about the visual experience. I have not been to neither Lady Gaga nor Kylie Minogue or Madonna concerts, so I cannot judge, how new this is, but it is top quality. Not only has she a great team of dancers and cool choreography, but the design of the background images with the different shapes and colours create another experience on top of the musical experience. The production company Canada from Barcelona have already worked with Rosalía on the video clips of Malamente and Pienso tu Mira, and I wouldn’t be surprised if they had designed the background lights for the concert too. It certainly looks like their style. Fun, simple, entertaining, and definitely adding to the experience.

All in all it was a great “night out”. Finished by 10.30pm, so not literally a night, but still, thanks Rosalía, it was fun!